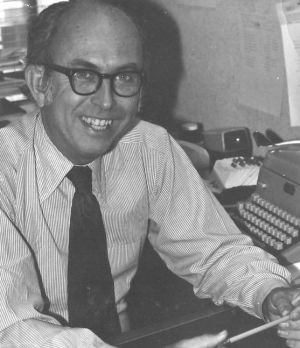 “One of the Greatest Copywriters of All Time”

-a quote about Tom Collins by Ed Nash from his book “Direct Marketing,” published by McGraw-Hill

To say that Tom Collins had a profound effect on my life would be an understatement. He was a brilliant copywriter and marketing strategist who was also one of the most giving and caring persons you could ever meet. Here’s how I got to know and learn from him.

It was way back in 1988 and I was a struggling new freelance copywriter. I was trying to learn everything I could about copywriting and marketing. So I read everything I could get my hands on. I studied Gary Halbert, David Ogilvy and Jay Abraham as well as Claude Hopkins, John Caples, Robert Collier, et al. And I subscribed to the two major publications, DM News and Direct Marketing magazine.

I received my monthly copy of Direct Marketing magazine in February of that year and I was excited to see that the featured story was about Tom Collins. He was a legend in the advertising industry and I had read his latest book, Maxi-Marketing. So, you can imaging my delight when I saw a picture of him on the cover. Here’s a copy of that cover… 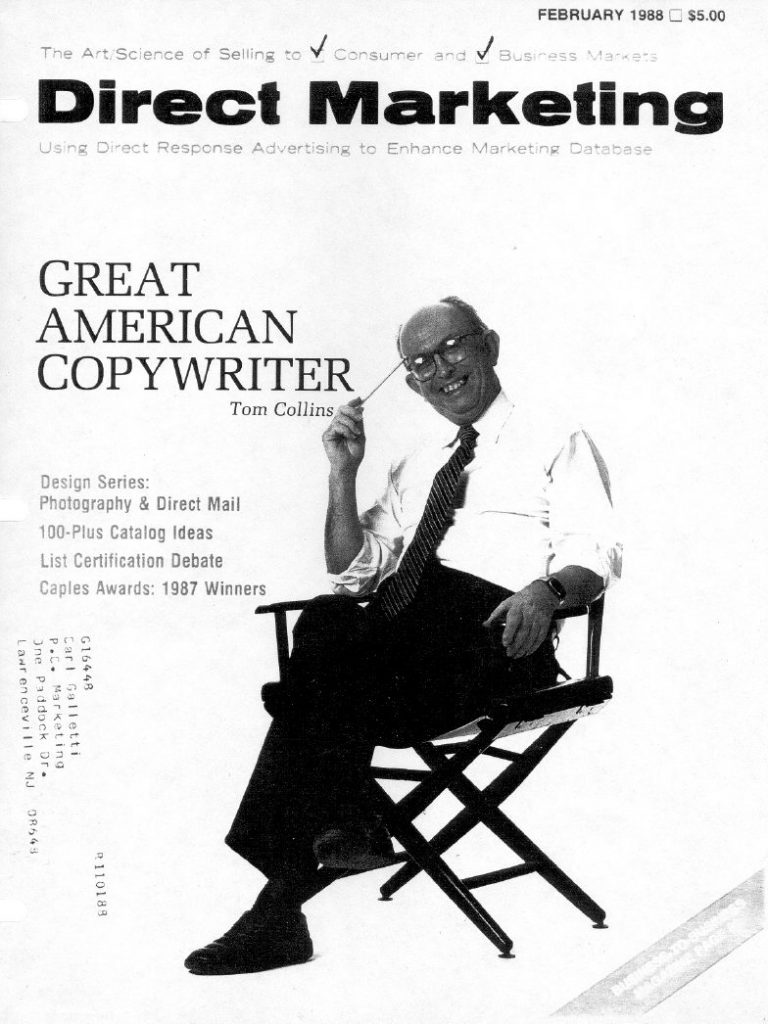 Tom L. Collins
On the cover of Direct Marketing magazine

I quickly turned to the article and voraciously read every single word.

If you don’t know who Tom Collins was, let me briefly fill you in and you can read more in his obit, linked to at the bottom of this page.

He was partnered with Stan Rapp on their best-selling book, Maxi-Marketing. It was geared for corporations but the marketing principles in it were very much like what I was learning from marketing genius, Jay Abraham.

Tom and Stan had founded Rapp & Collins that, at the time, was the 3rd largest direct response advertising agency in the world but Tom had retired from that and moved upstate New York to retire with his wife. A while later, after his wife had passed, Tom found himself alone and bored on his farm, so he came back to New York City to work on books and help some clients. He had also decided to teach a little at New York University.

That’s where I met him. Although I was living in central New Jersey at the time, I had gone to NYU but dropped out with only a semester to go. So, I had this crazy idea that I might want to finish that semester by going to night school and so I had sent away for their catalog a year before and they would periodically send me a new one.

When the latest one came for the summer 1988, I was casually paging through it when I noticed a course called “Overlooked Opportunities in Marketing.”

“Hmmmm,” I thought to myself. That sounds right up my alley. And when I discovered that Tom Collins was the instructor I immediately signed up for the course.

Now, I can’t tell you how many times I fantasized about meeting  one of the greats of direct response advertising in person. Although I felt I knew them through their books, I would have really liked to meet at least one of them in person. Little did I know that I would eventually be meeting and even working with the likes of Gary Halbert, Jay Abraham, Ted Nicholas and many more. But, at this time I had a unique opportunity to meet a marketing genius in person. Tom Collins was a legend in the field and I never imagined I would again have an another opportunity like this.

It required me to drive for an hour and a half into the city, attend the class and then drive an hour and a half back and do that three nights a week for several weeks. It was a big commitment but one I was more than willing to make.

When Tom walked into the room, I was awe struck. Everyone else, acted like “who’s this old guy and what makes him think he can teach us anything?”

Me, however…I hung on EVERY SINGLE WORD HE SAID. I took copious notes, something I rarely did. I wanted to study everything he said.

At the end of the class I walked up to Tom and introduced myself and we had a nice chat about marketing and the subjects covered in class. I made him know that I appreciated the opportunity of being in his class – not in words but in attitude.

Over the next several weeks we’d talk after every class and at the end of the course I was sorry it was over. Somewhere along the line he had handed me his business card. We said our good-byes and that was it. Weeks later when the grades came in I got an “A”. I have never been so unmoved by an “A” grade in my life. I didn’t care what my grade was. I had already gotten much more than a grade. I got to talk copywriting, advertising and marketing with a direct response legend. I had learned much and was ready to put it to work.

Now, if only that had been enough to get tons of business coming in, I would have been over joyed. However, it was early in my career and I was still struggling to get clients for my freelance copywriting services. So, I toyed with the idea of applying for a  job at an advertising agency. I had done a little freelance work for some agencies and didn’t like it at all. They seemed to be more concerned with impressing clients with their clever ideas than with actually selling something. “Here, take this headline and photo and fill in the grey area below the headline with words.”

They thought copywriting was about “writing.” I KNEW it was about “SELLING.”

Anyway, I had a wife, three children and an expensive mortgage to pay, not to mention car payments, insurance, taxes, etc. So, a full time copywriting job with a steady paycheck looked appealing.

Naturally, the first person I thought of was Tom. So I got his business card out and gave him a call and told him what I had in mind and asked him if he had any tips for me. He gave me some great insights and advice and when I got off the phone, I was optimistic about finding a decent paying job.

A few days later, I received a nice letter from Tom which I’ve reproduced below. He had written a “recommendation letter” for me. I hadn’t asked for it. He just wrote it because he believed in my ability and that had a profound effect on me. Here’s the letter he sent… 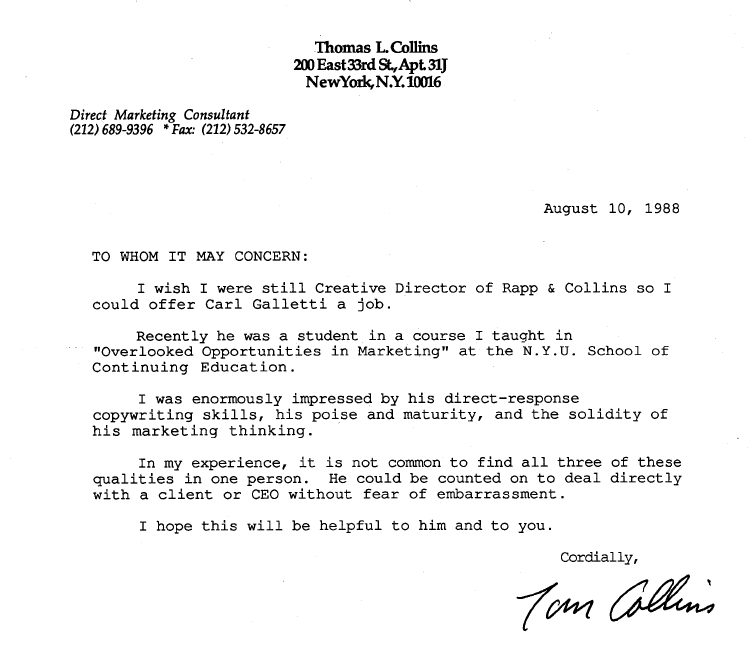 I was so proud of that letter! I showed my wife and kids (they were unimpressed–“Who’s this guy?”). I told my friends, etc.

Anyway, it turned out that my copywriting business started taking off after that and I never needed to use Tom’s letter. Maybe it just gave me the confidence I needed. Although I never sought a full-time copywriting job at an ad agency, I later worked for a while as the Vice-President of a little boutique ad agency on Madison Avenue but quickly had to get back to my real passion, freelance copywriting and marketing.

I will never forget Tom. He was a brilliant ad man who had a great career, as you can read in his obit (link below). But above all else, Tom was a GOOD man. He made a profound difference in my life and I will forever be grateful for that. Thank you Tom.